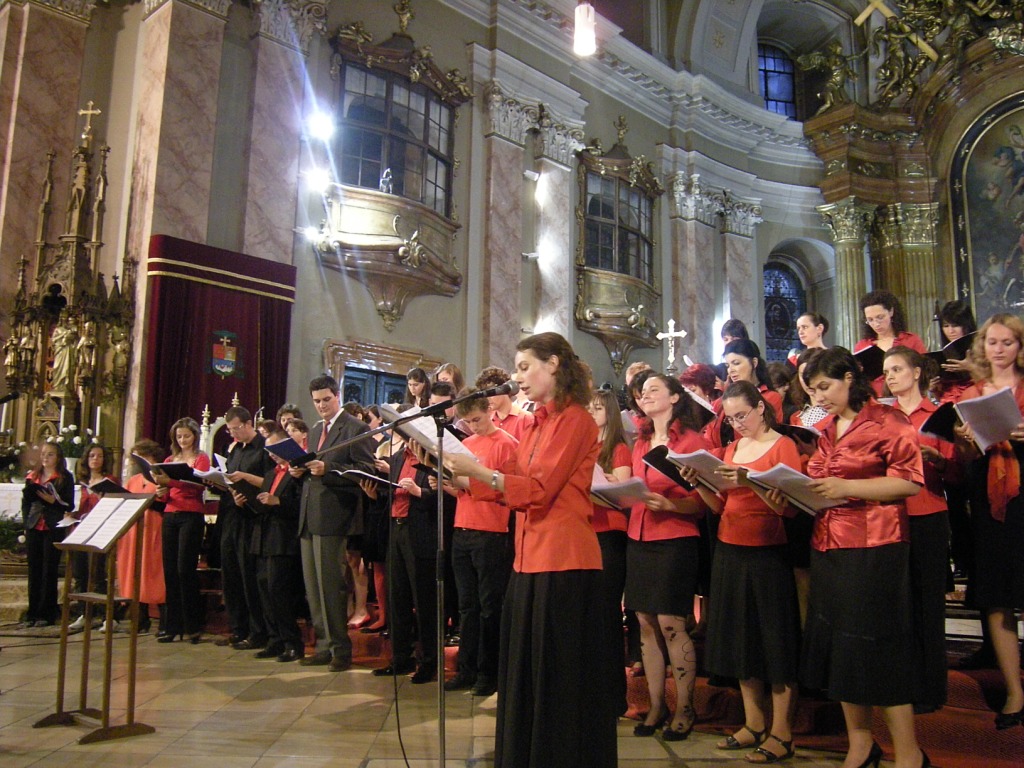 Three years have already passed since the inauguration of the Hospice “House of the Divine Mercy” and of the admission of our first patient. At the beginning of our activity, we had a few reservations regarding the sustainability and continuity of this project as a result of the unstable economic, social and political situation here in Romania. Looking at the evolution of the project, we are overjoyed to see that our activities are of great use to this community and there are more and more people from different regions of Romania who solicit our services. The gratefulness expressed by the many patients and their families who have benefitted from the palliative care provided by the Hospice stand as a testimony to its value.
The present situation in regards to the number of people who have been admitted in our Center (which has place for ten patients) in 2009 is the following:

In this year, the specialized personnel participated in continuous formation courses, conferences or regional and national meetings. Many events were organized within the Centre as well:

In 2009, the Center’s Coordinator participated in meetings organized by the Association of Palliative Care of Romania which were held in Brasov and had many themes associated to palliative care.

The Center`s Social Worker participated in various meets and gatherings with diverse themes:
♦ A meeting held by DGASPC Timis where services for residential care in day centers were discussed.
♦ A course organized by the Foundation of Social Services Bethany Timisoara which held the theme “ Managing Volunteers”
♦ A seminar based on “The Writing of Projects”, organized by the Foundation of Social Services Bethany Timisoara and held in Simeria.
♦ A round-table discussion on the premises of Hotel Timisoara where the “Role of the society in the stimulation of transparency and responsibility in local planning” was discussed. This was organized by the Institute for Public Policies Bucharest and the Foundation for You, Timsisoara.

Our medical doctors and medical assistants, important members of the interdisciplanary team of the Center, were active participants in various events:
♦ The Order of Assistants and Midwives of Romania organized an informative seminar on the 28th of February on the premises of the CFR Hospital in Timisoara. The topic at hand was the significance of palliative and was given by the Center’s doctor and coordinator. During the seminar, one of the Centre’s assistants presented a paper called “The Ideal in Dialoguing with the patient.”
♦ During the period between 9-13 April, 2009, two of the Center’s medical assistants participated in a course called “Palliatively Caring for the Incurable Sick” which was sustained by accredited lectures in the Hospice “House of Hope.”
♦ On the occasion of the International Day of the Medical Assistant on the 8th of May, a seminar was held in which our Center’s medical assistants presented a paper titled “Palliative care and assistant’s role in the spiritual direction of the sick.” This was organized by the Order of Assistants and Midwives of Romania and it took place in the Adam Muler Guttenbrun House.
♦ On the 23rd of May, 2009, the Centre for Palliative Care organized a seminar in the Gerhardinum which was themed “Implicating the holders and volunteers in caring and improving the quality of life of the sick.” The lecturer was the Centre’s coordinator in conjuction with the medical assitant.
♦ On the 18th of September, 2009, one of the medical assistants participated in the 5th National Conference organizad by the Order of Medical Assistants, General Practioners, Midwives of Romania. The Conference was titled “Quality and Safety in the Caring for the Patient” and was held in Arad.
♦ The Center’s doctor participated in the National Conference on Palliative Care in Constanta between the 11th and 13th of September and organized by the Association for Palliation, Romania.
♦ Together with the Association of Medical Assistants, Timis, we organized a conference called “Palliative Care: Past, Present and Future” which was held on the 7th of November, 2009. In attendance were medical doctors, psychologists and medical assistants from different regions of the country. The scientific session of the Conference took place in the Adam Muler Guttenbrun House and many doctos, psychologists and medical assistants presented different themes:
– “The Divine Mercy House Hospice in Timisioara as a model in palliative care”
– “Treating the pain of cancer- the aspects of nursing”
– “Palliative care in external bleeding”
– “Psychological support for minors whose parents are in the terminal phase.”
After the presentation of the papers, a work-shop followed with the theme the Management of pain in which the Association for Palliative Care RO Association Timisoara in collaboration with Lisburn Trust, Northern Ireland who presented “Palliative Care, the Automatic Syringe” participated through Teleconference.
The closing of the Conference took place in the Divine Mercy House Conference in Timisoara the participants, after visiting our Center, watched the video-presentation “The Divine Mercy House-Past and Present.”
♦ On the 27th of November, the Center’s coordinator participated in a public debate with the theme “ Accesing, Enduring, Supporting and Counselling those Suffering from Alzheimer.” This place in Ciacoca which is in the Timis region and was organized by Regional Council of Timis and the Direction General of Social Work and Child Protection, Timis.

On the premises of the Centre, various courses, gathers and seminars took place:
♦ During the year 2009, on the premises of the Hospice, a course took place for medical doctors from the Western Romanian which had as an objective the obtainment of a certificate in palliative care. It was organized in numerous modules and was managed by one of the Center’s doctors.
♦ Once every two months during the year 2009, the Center’s medical assistants participated in a course for formation purposes and also to perfect themselves in the professional field. This course was held on the Hospice’s premises and discussed the following themes:
– The motor system-bones
– The spine/joints
– Muscles and tendons
– The digestive tract
– Glands
– Female organs
♦ The Center’s Coordinator organized a course for the medical staff in September of 2009 with the title “Technical norms, Nosocomial normalities, Sanitation and Disinfection in the Hospice”.

Practice
Throughout this year, we welcomed various students in our Center so that they might begin their pratical activities. The schools from which these students were sent are the following: The National College Ana Aslan-Timisoara; Post-Secondary School St.Mary Hilfe-Timisoara; The University of Sociology and Pscyhology/Social Work Sector.

Celebrations
On the occasion of various celebrations, many gatherings took place within our Center in order to deepen the relationships between colleagues. All in all, they created a familiar atmosphere for our patients and for our carers. These gatherings were also occasions to express our gratitude towards our volunteers and benefactors:
♦ During Lent, we celebrated the Way of the Cross weekly. Our Center’s employers, carers, collaboraters and volunteer participated.
♦ On the 19th of April, we celebrated the feast day of our Center which holds the name “Divine Mercy House.” The program was as following: After the celebration of the Holy Mass which took place in the Center’s Chapel at 3:00 pm, we had a time of prayer and the exposition of the Blessed Sacrament. Together with our guests, volunteers, personnel and collaboraters, we sang the Divine Mercy Chaplet. In-between each decade, the youth choir belonging to Sacred Heart of Jesus Church in Balcescu sang a song. The festivities continued with a picnic that took place in the Center’s park.
♦ The 5th annual and tradition concert “Timisoara Gospel Project” took place on the 17th of May, 2009. The purpose of this was to help those in the Hospice. The Gospel Concert was organized by Dominic Fritz, a young volunteer from Germany in the Roman-Catholic Cathedral of Timisoara “St.George.” Some of ther Center’s employees and volunteers participated in the choir.
♦ The Association “For Help” honoured us on various occacions throughout the year with beautiful concerts which were delivered by children.
♦ On the 10th of October, the World Hospice Day, our Center organized a cultural program in our conference room where volunteers and the family of the sick were invited to attend.
♦ After three years of inaugurating the Center, during Holy Mass, we thanked our Good Lord and all our benefactors. This took place on the 29th of November, in our Center.
♦ For St.Nicholas’ feast day, our Center was filled with joy when our patients, caregivers, employees and volunteers received gifts from St.Nicholas present in person.
♦ This year for Christmas, various groups from Timisoara and other localities came to carol for us. The birth of our Lord was welcomed with lots of joy, beauty and spiritual peace by our patients, caregivers and employees.

In the year 2009, the filling up of our Center with objects and consumables necessary to make it funcional continued. Donations from the concert “Timisoara Gospel Project” along with donations for other donors helped us to purchase yet another oxygen mask which is needed by our patients. For the upkeeping of your park, we build a wooden fence which was necessary in order to maintain our patients’ and caregivers’ privacy as this is often where they take breaks, walks or receive spiritual and psychological counsel.